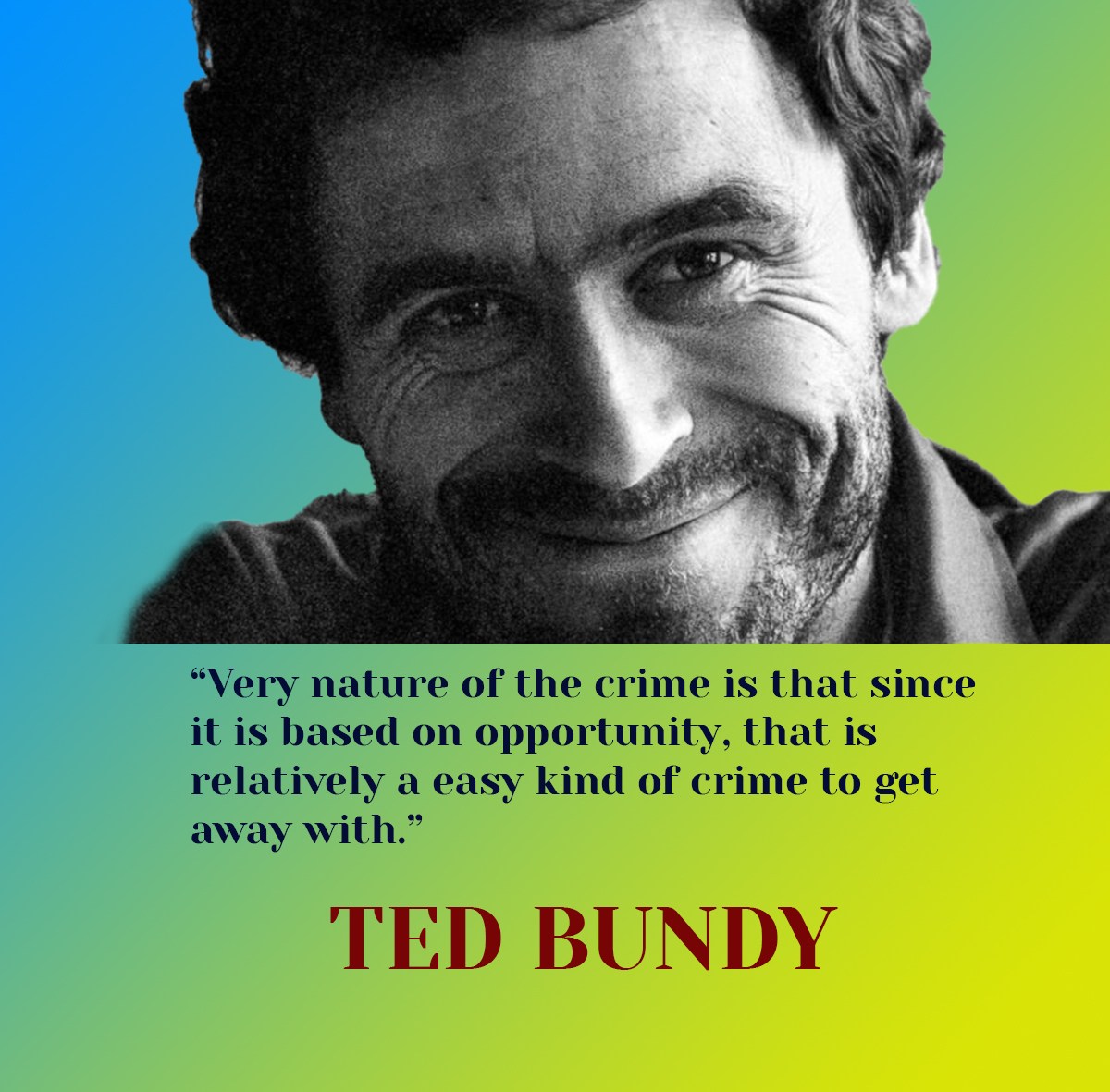 In this article, we will write about Ted Bundy (full name Theodore Robert Bundy), his life history and experiences, his relationships, his brutal crimes, and his arrest and conviction.

In the late 20th century different states of the USA have encountered the reign of terror of Ted Bundy, a vile serial killer. The motives behind those serial killings were most of the time unknown. Bundy ferociously committed sexual homicides in Washington, Ohio, Colorado, Oregon, Utah and Florida. The brutality and degree of violence caused by Bundy were traumatic for the entire world.

Theodore Robert Bundy was born on 24 November 1946 and his birthplace was Burlington, Vermont. Eleanor Louise Cowell was his biological mother. He was born out of wedlock. Being an illegitimate child, his grandparents raised him as their son and told him that his mother was his sister. His mother married Johnie Bundy in 1951 and he took his name then. Later, he had discovered the truth regarding his birth. On 23rd January of 1989, a day before his execution he gave his final interview with Dr. James Dobson at Florida State Prison. In that interview, he disclosed that he was raised in a solid Christian family and he was never physically or mentally abused by his family.

Netflix made a movie on Ted Bundy and the lead role was played by Zac Efron. The name of the movie was based on the Judge’s comment.

Bundy studied psychology at the University of Washington and he was graduated in 1972. Later, he was accepted at Utah Law School in 1973 although he dropped out a year later. He was politically and socially active during his college days. He was a very bright and creative individual.

Ted Bundy had a long-term relationship with Elizabeth Kloepfer, whom he even planned to marry but during his imprisonment, they broke up. Many of his victims resemble his girlfriend. He used to choose long dark-haired, parted in the middle, and attractive women to kill.

Ted Bundy and Carol Ann Boone met while Bundy was on trial for murder in Florida in the 1980s. Boone was a loyal supporter of Bundy and even married him while he was in prison. She eventually had a child with Bundy, a daughter whom she named Rose.

In his final interview with Dr. James Dobson, he blamed hardcore pornography for his crimes to some extent. He was vulnerable to hardcore pornography. The sexual violence portrayed in those printed videos or detective magazines had given rise to his initial sexual fantasies. He claimed that he was highly addicted to hardcore pornography. In his teenage days, he used to collect these printed pornography videos or magazines from local grocery shops or local drug stores and sometimes he used to get them from his neighborhood’s garbage or other places. His grandfather was a violent and abusive person. ­This might have affected his childhood. Ted Bundy was highly manipulative and psychopath. Being a student of psychology, he could read human minds and was able to control them to some extent. This gave him upper hand at his crime commission. He used to drink before committing those heinous crimes. In that interview, he disclosed that when he was killing and raping those young women, most of the time he was half-drunk. He was a mild alcoholic.

Theodore Robert Bundy is one of the most diabolical and vile serial killers of eternity. He was a brutal murderer, necrophiliac, and sexual deviant of the 1970s. His charming look and charismatic behavior have helped him to lure women easily. Ted Bundy’s crimes were particularly gruesome and disturbing, and he often targeted young women and girls, many of whom he abducted and murdered. He would often lure his victims by pretending to be injured or incapacitated, and then attack them when they tried to help him. He would then take his victims to a secluded area, where he would sexually assault and murder them. The states of Washington, Colorado, Ohio, California, Idaho, Utah, and Florida witnessed his reign of terror from 1974 to 1978. In July 1974 Ted Bundy abducted and killed Georgann Hawkins. She was abducted from an alley behind her sorority house in Seattle. She was his first victim. In 1974 during broad daylight, he abducted two girls from Lake Sammamish State Park. When he was studying law at Utah Law School he raped and killed two women inside a cellar at Emigration Canyon. He later dismembered their bodies.

According to his confession, he killed and raped almost 36 women in different states of the USA but the police department claimed that the actual number may be over 100. During the last days of his killings in 1978, he attacked Chi Omega Sorority House at Tallahassee, Florida where he killed 2 sorority sisters and had beaten three others brutally. His last victim was Kimberly Leach a 12 years old school girl.

Here is a summary of Ted Bundy’s killing

On 16 August 1975 Sgt. Bob Hayward, a Utah Highway Patrol Officer observed that 1968
Volkswagen Beetle was parked outside of a house at 3 am. He chased the car and pulled it over. Ted Bundy told him that he was lost after having seen The Towering Inferno at the local drive-in. But there was no Towering Inferno. When Sgt. Searching Ted’s car he saw handcuffs, ice pick, flashlight, ski mask, rope, gloves, ripped sheet, pantyhose, and trash bags. He brought Ted in for evading an officer but Ted was freed on bond. Later, Sheriff Hayward told the incident to two of his detectives, who felt that Ted and the VW Beetle sounded familiar. The detectives of Utah contacted officers in Washington and they learned that Ted was on their suspects’ list in a series of sexual homicides. Bundy abducted Carol DaRonch on November 8, 1974, from Salt Lake City. DaRonch escaped and that’s how Ted left a witness. Later she identified him in a police station one year prior to Ted Bundy’s arrest. On March 1, 1976, Ted was convicted of abduction and sentenced to up to 15 years. In June 1977, Ted Bundy was extradited to Colorado for the sexual homicides of his two victims; he escaped from a second-story window when he was momentarily left alone. He was taken back into custody from Aspen. He again escaped from his prison cell at the Garfield County Jail in Colorado on December 31 st, 1977. He lost 15 pounds to escape from his prison cell. After escaping within the next 2 months, he attacked five women and killed three of them. On February 15, 1978, he was taken into custody by officer David Lee while he was driving a stolen car at night. He did not disclose his name to the officer for two days. One week prior to this incident FBI added Ted Bundy to their ‘Ten Most Wanted Fugitives’ lists. Bundy’s bite mark on the butt of one of the sorority victims of Chi Omega and his VW Beetle played significant roles in his conviction in Florida. At the time of his trial, he defended himself as his own lawyer and his trial was the first live broadcast trial in history. Bundy fought ferociously for his life and he had denied all the allegations for a long time. A Miami Jury convicted Ted Bundy on two counts of murder on July 24, 1979. An Orlando jury convicted him guilty on one count of abduction and one count of murder on February 7, 1980. His attorneys negotiated a deal that if he pleads guilty, he will get life imprisonment. But at the courthouse, Bundy declined to accept the deal. In Florida, his reign of terror finally ended. Florida State Prison convicted him and he was given the death penalty. On 24th January 1989, he was executed in an electric chair named ‘Old Sparkly’ at the age of 42 years.

Experts have defined psychopathy as a ‘personality disorder’. Using drugs, addiction to and availability of hardcore pornography, shame for being an illegitimate child, rejection, family abuse, and personality disorder have contributed to shaping Ted Bundy’s human development. He was an outcome of his environment as well as hereditary.