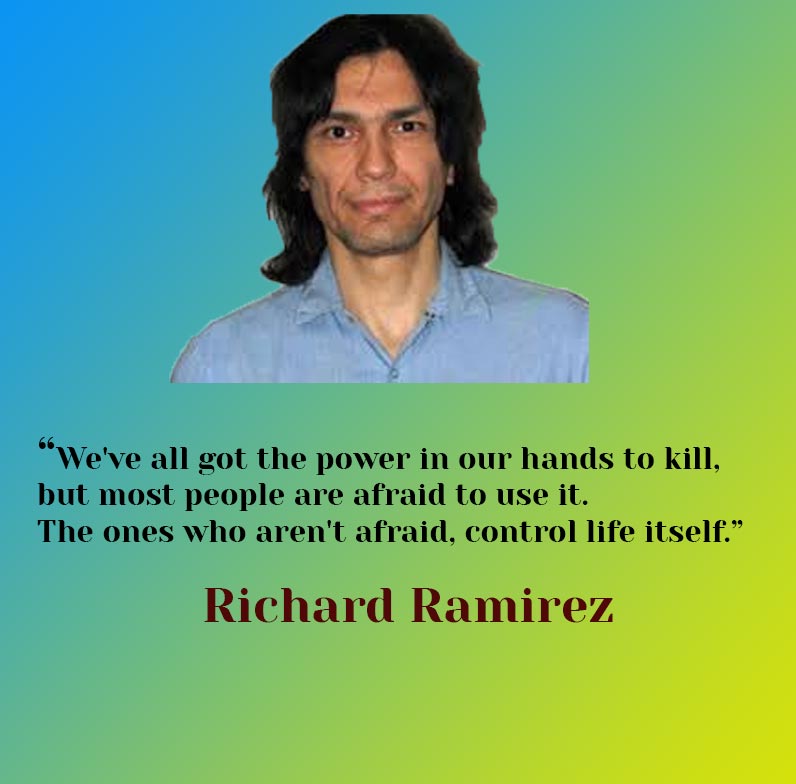 In 1980, both Pope and Queen visited the US. The Olympics was in this year. The US was going through a great time. The crime rate was decreasing gradually. Suddenly there were multiple murders. This shook the nation. Everyone was in fear. All the murders were to some extent related and the police came to the conclusion that one man did all these murders. They named this murderer “Night Stalker”. This night stalker is Richard Ramirez. In this blog, we are going to talk about the Night Stalker.

Richard Ramirez was a serial killer who terrorized the Los Angeles area in the 1980s. He was convicted of 13 counts of murder, 5 attempted murders, 11 sexual assaults, and 14 burglaries. He was known as the “Night Stalker” because he typically broke into his victims’ homes at night while they were asleep.

Over the next year, Ramirez terrorized the city, breaking into homes at night and attacking his victims with a variety of weapons, including knives, guns, and a hammer. He often mutilated and sexually assaulted his victims, and sometimes left satanic symbols at the crime scenes. Netflix made a documentary series on him named Night Stalker.

Richard Ramirez was born in El Paso, Texas in 1960. His birth name is Ricardo Leyva Muñoz Ramirez. His father’s name is Julián and his mother’s name is Mercedes. The pregnancy of Mercedes wasn’t smooth as she had to inhale chemical fumes at the boot factory she worked. Richard Ramirez was about to die when he was two due to a concussion. He had epilepsy. He was a loner. He had a troubled childhood and was exposed to violence at a young age. His father Julián often used to physically abuse his siblings. He started to smoke marijuana only at the age of 10. His cousin, Miguel (Mike) Ramirez, who was a Vietnam War veteran, often told him stories of torturing and killing Vietnamese civilians. Richard was fascinated by all the obnoxious and notorious crimes done by his cousin. Ramirez also witnessed his cousin murder his wife in a fit of rage.

As a teenager, Ramirez began using drugs and committing petty crimes. He eventually dropped out of high school and became a drifter, traveling around the country and committing burglaries to support himself. In 1984, he arrived in Los Angeles and began his spree of violent crimes.

Crimes and Murders of Richard Ramirez

Here is a timeline of some of the known crimes Richard Ramirez committed:

The modus operandi (MO) of a criminal refers to the specific methods and tactics that they use to commit their crimes. In the case of Richard Ramirez, also known as the “Night Stalker,” his MO involved breaking into homes at night and attacking his victims while they were asleep. Ramirez typically targeted homes in residential neighborhoods and would break in through a window or door. He would then attack his victims with a variety of weapons, including knives, guns, and a hammer. He often mutilated and sexually assaulted his victims, and sometimes left satanic symbols at the crime scenes.

Ramirez’s MO was unpredictable and varied from case to case, making it difficult for law enforcement to track and catch him. He committed his crimes over a period of about a year, from June 1984 to August 1985

On the evening of August 24, 1985, Richard Ramirez was recognized by a group of residents in East Los Angeles who had seen his face on a wanted poster. He was chased and tackled by the residents, who held him until the police arrived.

The police had been searching for Ramirez for months and had received thousands of tips and leads. They had also released a composite sketch of the suspect and offered a $25,000 reward for information leading to his capture.

After his capture, Ramirez was positively identified by a fingerprint match and was also identified by several of his victims and witnesses. He was charged with 13 counts of murder, 5 attempted murders, 11 sexual assaults, and 14 burglaries. He was found guilty of all charges and sentenced to death in 1989.

Ramirez’s capture was seen as a major victory for law enforcement and brought relief to the Los Angeles community, which had been terrorized by the “Night Stalker” for over a year. It also highlighted the importance of public vigilance and cooperation with law enforcement in helping to catch dangerous criminals.

His wife name is Doreen Lioy. Lioy was a freelance magazine editor who became infatuated with Ramirez after reading about his crimes in the news. She visited him in prison and the two began corresponding through letters. They eventually got married in 1996, with Lioy wearing a black wedding dress and Ramirez wearing his prison jumpsuit.

The marriage was controversial, as Ramirez was a notorious serial killer who had terrorized the Los Angeles area in the 1980s. Many people were shocked and outraged that Lioy would want to marry such a violent and dangerous man.

Despite the criticism, Lioy remained devoted to Ramirez and visited him regularly in prison. She also wrote articles and gave interviews defending him and claiming that he was innocent. Ramirez died of natural causes in 2013, and Lioy continued to speak out about him and his case in the years following his death. Richard and Lioy didn’t have any children.

He stayed at the Cecil Hotel in Los Angeles during the time he was committing a series of murders, attempted murders, sexual assaults, and burglaries in the city in the 1980s.

The Cecil Hotel was a budget hotel located in the Skid Row neighborhood of Los Angeles. It had a reputation for being a place where transients, criminals, and other down-on-their-luck individuals stayed. Ramirez checked into the hotel in April 1985, using an alias and paying in cash.

The hotel was not initially connected to Ramirez’s crimes, but it became part of the investigation after he was captured in August 1985. During a search of his hotel room, investigators found items that linked him to several of the crimes, including jewelry and other personal belongings that had been stolen from his victims.

Ramirez’s stay at the Cecil Hotel became the subject of media attention and was featured in a number of true crime books and documentaries about the “Night Stalker” case. The hotel has since been renovated and is no longer considered a budget hotel. It is now known as the Stay on Main. Ramirez’s room number was 19 and it was on the 14th floor. It is known as 1419.

Richard Ramirez died of natural causes on June 7, 2013, while awaiting execution on death row at San Quentin State Prison in California. He was sentenced to death. He spent over two decades on death row, during which time he appealed his sentence and conviction numerous times.

During his time in prison, Richard Ramirez developed a number of health problems, including liver failure and diabetes. He also suffered from B-cell lymphoma, a type of cancer that affects the immune system.

Despite his illness, Ramirez remained unrepentant for his crimes and continued to maintain his innocence. He died at the age of 53, with his wife and a few other supporters by his side. His death brought an end to one of the most notorious criminal cases in the history of Los Angeles.

The case of Richard Ramirez shocked and terrified the Los Angeles community and garnered national attention. It also highlighted the need for improved forensic techniques and better communication between law enforcement agencies in order to effectively track and catch serial killers.

Here are some other serial killers you might want to read.