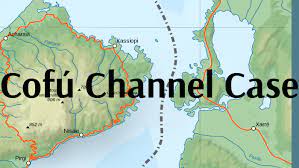 In this blog, we will write about the Corfu Channel case and will analyse the legal principles established through this case by the ICJ.

Facts of the Case

On May 15th 1946 the British naval warships went across the Corfu Channel without the permission of the Albanian government and were fired upon by Albanian coastal batteries. Afterwards, on October 22nd, 1946, a fleet of British warships (two cruisers and two destroyers), left the port of Corfu and advanced northward through a channel previously swept for mines in the North Corfu Strait. Both destroyers were struck by a mine and were heavily damaged. This occurrence resulted in many human deaths and severe injuries. The two ships were mined in Albanian territorial waters in a previously swept and check-swept channel.After the mining accident of 22nd October, the United Kingdom Government sent a note to the Albanian Government. The note asserted the UK government’s intention to sweep the Corfu Channel shortly.  Concurrently, at the United Kingdom Government’s request, the International Central Mine Clearance Board decided, in a resolution of November 1st, 1946, that there should be a further sweep of the Channel, subject to Albania’s consent. London received the reply of the note from the Albanian government on 31st October. It expressed that the Albanian Government would not give its consent to mine sweeping unless the operation in question took place outside Albanian territorial waters. The Albanian government directly expressed that any minesweeping carried on without the permission of the Albanian Government inside Albanian territorial waters will be regarded as a deliberate violation of Albanian sovereignty and territory. On 12th and 13th November of 1946 the British Royal Navy launched ‘Operation Retail’ and carried out the minesweeping against the wishes of the Albanian Government. This case was brought before the Court on May 22nd, 1947, by an Application filed by the Government of the United Kingdom of Great Britain and Northern Ireland instituting proceedings against the Government of the People’s Republic of Albania.

Issues of the Corfu Channel Case

1. Whether Albania is responsible under international law for the mine explosions which occurred on the 22nd October, 1946 in Albanian waters and for the damage of machinery and loss of human lives which resulted due to it?

2. Whether the United Kingdom has violated the sovereignty of Albania by reason of minesweeping operation without consent of the Albanian Government?

3. Whether the United Kingdom is entitled to compensation for the loss suffered?

Concept of Right to Innocent Passage

Passage is defined under Article 18.

Article 19 defines Innocent Passage “Passage is innocent so long as it is not prejudicial to the peace, good order or security of the coastal State.”

Article 8 of the Montevideo Convention on the Rights and Duties of States, 1933 states,

Article 4 of the Montevideo Convention on the Rights and Duties of States, 1933 states that,

1) Albania as a state has a responsibility not to breach international law. This responsibility originates from well-recognized principles of humanity which were even more onerous in time of peace than in war, from the principle of freedom of maritime communication, and from the obligation of all states not to knowingly allow their territory to be used contrary to the rights of other states. The Albanian Government had full knowledge about the mines and it had state responsibility to inform other states about the existence of the minefields. The Albanian government had the duty under international law to inform the ships approaching about the danger.

2) The UK argued that the passage on October 22nd, 1946 was innocent and that according to rules of international law it had the ‘right to innocent passage’ through the North Corfu Channel as it is regarded as a part of international highways and does not need a prior permission of the territorial state. The North Corfu Channel must be viewed as belonging to the ‘class of international highways’ across which an innocent passage does not need special permission and cannot be restricted by a coastal State in time of peace. But Albania was at war with Greece at that time which means that the coastal state was not in time of peace. But the UK violated the territorial sovereignty of Albania by launching Operation Retail without its consent.

The Court held that Albania was responsible under international law for the mine explosions in Corfu channel that had taken place in Albanian territorial waters and for the damage and loss of life which had occurred. The court gives judgement that the United Kingdom did not breach the sovereignty of Albania due to the acts of the British Royal Navy in Albanian waters on October 22nd, 1946. However, when the British Royal Navy launched the operation for minesweeping in November 1946, it violated the sovereignty of Albania. This operation did not have the permission of international mine clearance organisations, could not be justified as the exercise of a right of innocent passage, and international law prohibits  a state to assemble a fleet in the territorial waters of another state and to carry out mine-sweeping in those waters. In a third judgement, rendered on 15 December 1949, the Court calculated the amount of reparation owed to the United Kingdom and ordered Albania to pay £844,000.

This was a short summary of the Corfu Channel case. Click here to read more International Cases.

FB
Malik Fariha Mehnaz
Malik Fariha Mehnaz is pursuing LLB (Honors) from the University of Dhaka. She is a creative and ambitious young woman who simply loves learning and has a passion for discovering new things. She is highly interested in the field of commercial and corporate law.
You can reach her at mehnazfari[email protected]