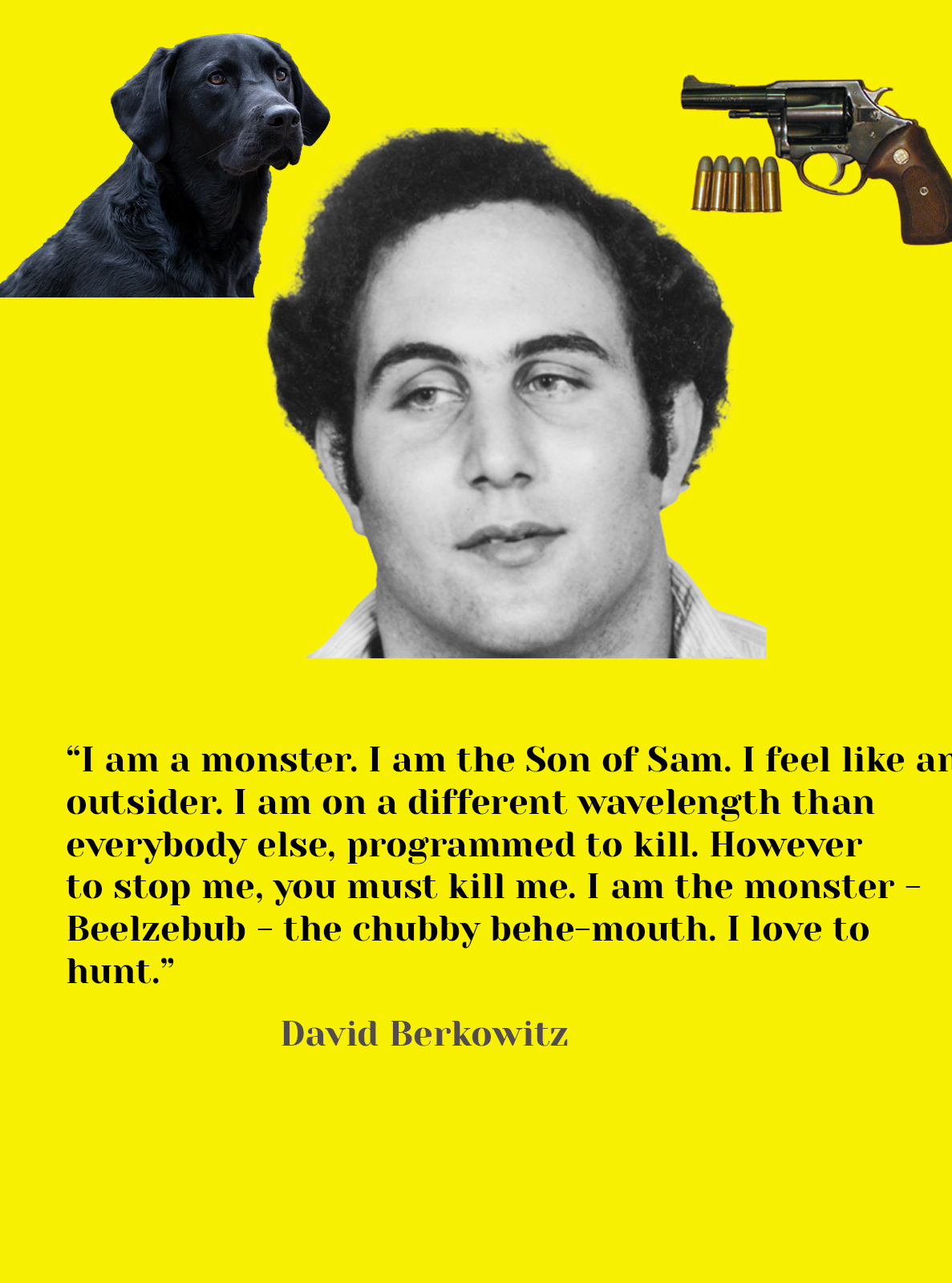 In this blog, we will write about one of the most infamous serial killers of the USA, David Berkowitz. He was also recognized as the ‘Son of Sam’. We will write about his early life history, crimes, arrest and conviction and lastly his current status.

In the years of 1976 and 1977, the New York state of the USA was thrown into a state of terror of an emerging serial killer known as Son of Sam. David Berkowitz or self-proclaimed with the name of Son of Sam killed six people in New York City from 1976 to 1977 by using a 44-Caliber Revolver. He asserted that he was given an order to kill people from a demon-possessed black Labrador Retriever of his landlord Sam Carr.

David Berkowitz was born on 1st June 1953. His birth name was Richard David Falco and he was born out of an extra-marital affair. He was born to a penurious Jewish mother named Elizabeth Betty Broder in Brooklyn. Being born out of an extra-marital affair his mother gave him for adoption after few days of his birth. He was adopted by hardware store retailers Nathan and Pearl Berkowitz. They used to live in the Bronx neighborhood. Nathan soon realized that this adoption was a mistake and he was not sympathetic towards his adopted son. On the other hand, Pearl loved him and she was very close to her adopted son.

As a child, David was a loner and he was very violent. At the age of 7 years, he was hit by a car and received severe head injuries. He did not have a social life. He was not loved and accepted by society and this made him frustrated. He was reportedly a smart child although he did not involve in social interaction much. No social interaction and introversion have contributed to his personality development. He was even bullied during his childhood. During his childhood, he was fascinated by fire. He loved to play with fire.

In 1967, at the age of 14 years, he lost his adoptive mother Pearl. His mother died of breast cancer. The death of Pearl devastated him emotionally and mentally. After the remarriage of his adoptive father, David Berkowitz was not connected with him anymore. His adoptive father moved to Florida without him. Later, he discovered about his adoption and this made him resentful of his biological parents.

He joined the US Army when he was 18 years old in 1971. He was an excellent marksman. He even served in South Korea. In 1974 he was honorably discharged from the army and returned to the Bronx. He got admitted into Bronx community College but could not finish his degree. Later, David rented an apartment in Yonkers and was working as a letter sorter for US Postal Service. According to his neighbors, he was a lonely man and his behavior was strange. At that time, he was reading the ‘Satanic Bible’ authored by Anton Szandor LaVey. He started to believe that he was controlled by the devil.

David Berkowitz brutally stabbed a woman with a knife in 1975. She did not die but was seriously wounded. This was the beginning of this killing spree. In 1976, David Berkowitz shot two teenage girls named Jody Valenti and Donna Lauria while they were sitting in a car. One of them was killed instantly and another was severely injured. On 17th April 1976, he struck again, this time he attacked a couple named Valentina Suriani and Alexander Esau, while they were sitting inside a car at 3 am. He even left a letter for New York Police Department at the crime scene. Both of them were killed on spot. He used to target young couples, sitting in a car. He was committing those shootings with a 44-Caliber Revolver. That’s why NYPD called him 44 Caliber Killer.

On 23rd October 1976, he attacked Rosemary Kennan and Carl Denaro, while they were inside the car. Carl was killed instantly but Rosemary luckily fled the scene. During 1976-1977, he killed two teenage girls, who were walking home from a movie. He was very specific at choosing his victims. Young girls and couples in uncrowded areas were his main targets.

In June, 1976 he started killing dogs particularly German Shepherds at Bronx neighborhood with his gun. He killed his landlord’s (Sam Carr) black Labrador Retriever when he was living at Bronx. He even threated some of his neighbors that he will kill them by stabbing. His neighbors were most of the time scared of him.

His last victims were a young couple named Stacy Moskowitz and Bobby Violante. He opened fired at them in Brooklyn while they were out for a date. Stancy was killed on spot and Violante lost one of his eyes and another eye was seriously injured. The last person murdered by him was Stancy Moskowitz. His crimes were brutal and without any motive. This made him very dangerous.

In his journal ‘The Phantom of Bronx’ he claimed that he committed 1500 arson at New York City. He wrote a letter to crime write NY columnist Jimmy Breslin declaring himself as a monster.

The New York Police Department launched Operation Omega to catch the Son of Sam. David Berkowitz wrote letters to NYPD from time to time and he even left few letters at crime scenes claiming him to be the Son of Sam. In Operation Omega 300 detectives and 45 psychiatrists were working continuously to decipher his letters and to catch him. His reign of terror made NY unstable. Women were cutting their hair short and couples stopped dating at nighttime. This was one of the largest manhunts in the crime history of New York.

At the crime scene of Stancy Moskowitz, a woman named Cecilia Davis had seen David Berkowitz collecting a parking ticket hurriedly. NYPD searched for all the parking ticket collectors in that area and found David’s address. This led to his arrest.

On 10 August 1977 Berkowitz was arrested by NYPD, after eleven days of Stancy’s murder at Brooklyn. He confessed soon to NYPD. He claimed that he was ordered by the devil to kill those people. He was under some sort of Satanic control. He asserted that his landlord’s black Labrador Retriever talked to him on behalf of Satan and ordered him to commit those heinous crimes. He further said that Sam Carr’s two sons were involved with him. But NYPD found no such evidence.

Later, he sent a letter to his psychiatrist, Dr David Abrahamsen and admitted that satanic story was nothing but a hoax. He pleaded guilty in 1978 and was sentenced 365 years at prison.

David Berkowitz converted to Christianity at the prison and wrote letters to his victim’s families asking for their forgiveness. He has been eligible for parole since 2002. But he declined every parole. He accepted his punishment. David Berkowitz is currently completing his imprisonment at Shawangunk Correctional Facility in Wallkill, New York.

Criminologists have labeled him as an ‘act processed killer.’ David Berkowitz loved the publicity and the attention media was giving him. He was stimulated to commit those crimes by publicity to some extent. Experts have diagnosed him with paranoid schizophrenia. Some experts think that his killings were sexually motivated, he felt sexually stimulated by killing those women. Professor David Wilson said how he socialized over a long period of time turned him into a serial killer. David Berkowitz was not a born killer rather he was made a killer by society.

The movie Summer of Sam is based on David Berkowitz a.k.a Son of Sam’s life story.