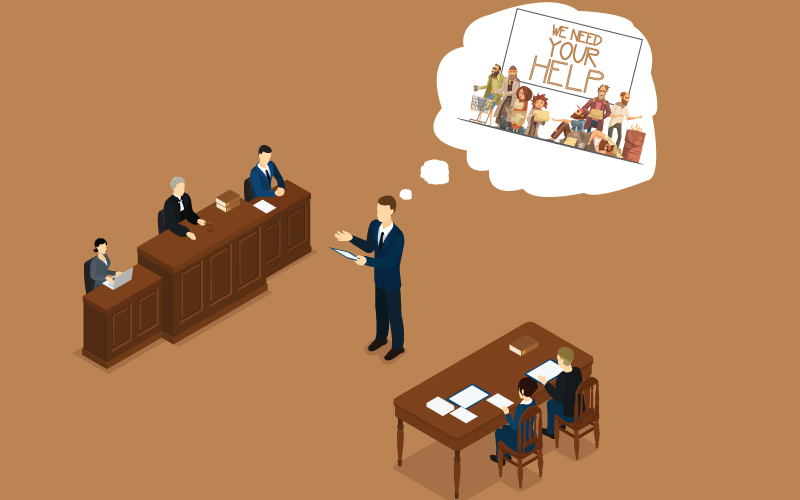 What is Locus Standi

‘Locus Standi’ the origin of this word is from Latin. In English, it’s called the rule of standing. Locus Standi means the right to appear before the court or bring an action. In general, only an aggrieved person can go to court.

Who is qualified to invoke the power of judicial review of the High Court Division under Article 102 of the constitution?

In order to have the standing to invoke discretionary jurisdiction, a petitioner has to show that he is an aggrieved party in an application for certiorari, mandamus, or prohibition. The expression ‘any person aggrieved’ can be given two meanings. One meaning is consonant with the traditional view and another meaning is consonant with the liberal view.

According to textual interpretation, ‘any person aggrieved’ is a person who has ‘direct personal interest’ in the case. Legal grievance or legal injury must be suffered by the aggrieved person not anyone else. An aggrieved person must be someone against whom a decision has been pronounced by the public functionaries which have wrongly deprived him of something or the decision has illegally refused him something or the decision has wrongfully affected his title to something. In the traditional view the right to invoke the writ jurisdiction is considered as a right in a strict juristic sense. The aggrieved person has to suffer a loss of personal benefit or advantage or the curtailment of a privilege or liberty or franchise only then he can invoke the writ jurisdiction of the high court division as a competent person. This was traditional view of Locus Standi.

According to the liberal interpretation of the term ‘any person aggrieved’ a public-spirited and bonafide person who shares ‘common grievance’ with others can represent the disadvantaged and under-privileged segment of the society in a court of law. In a modern day the governmental functions have increased so the courts found it necessary to liberalize the rule of standing or Locus Standi to uphold the rule of law. When a class of person suffers a violation of fundamental rights, a person who is bonafide and without a political motive alleging infraction of the fundamental rights is an aggrieved person.

Development of Rule of Standing/ Locus Standi in England

The famous ‘Blackburn Cases’ has liberalized Locus Standi in the UK. Mr. Raymond Blackburn was a member of the Parliament and a fluent speaker. In the 20th century, he came to the court with four cases with issues not of his own but pertaining to the general public. In each of these cases his locus standi was upheld. In Blackburn v Attorney General [1972] Mr. Blackburn came to the court challenging government’s right to join European Common Market, the court rejected his argument but the court heard him because he felt strong and the matter involved the people of England. In R v Metropolitan Police Commissioner [1973] He was granted standing in enforcing public duty owed by the police and GLC in respect of the exhibition of pornographic films. In R v Commissioner of Police [1968] he complained about the non-prosecution of gambling clubs by the police. The Queen’s Bench heard him and the law was enforced. The Courts of England liberalize Locus Standi through these cases to protect the rule of law. Any person can apply for judicial review in England under the Supreme Court Act of 1981 if he has sufficient interest in the matter in dispute.

Development and Extent of Locus Standi in India

Under Article 32 and 226 of the Indian Constitution, it is not precisely mentioned who can apply for writ petitions. The courts in India honored a tradition in requiring that the petitioner must be aggrieved.

V R Krishna Iyer, J and Bhagwati, J initiated and promoted the concept of public interest litigation in India. In the case of Mumbai Kamgar Sabha v Abdulbhai [1976] gross violation of fundamental rights was suffered by a considerable number of people who are downtrodden and under-privileged. The court interpreted the rule of standing spaciously in the context of socio-economic circumstances to upheld their precious rights. In Fertilizer Corporation Kamgar Union v India [1981] The government was about to sell a factory but the worker union challenged the government’s action in the court and the court grant the union standing. In the case of S P Gupta v President of India [1982] Bhagwati, J observed, when a legal wrong or legal injury is caused to a class of persons who are poor, helpless, disable and economically and socially disadvantaged, any member of society can seek judicial redress by representing them. Subsequently, the Courts of India were in favor of the organizations and bonafide public-spirited individuals, who bought constitutional issue of grave importance to the court where they were not directly involved but they shared a ‘common grievance’ with other people.

In 1974, two principles of sufficient interest were established by the court in Kazi Mukhlesur Rahman v Bangladesh. In the following two situations any citizen can become a petitioner in writ jurisdiction-

After almost two decades a new dimension is given to Locus Standi in the case of Dr. Mohiuddin Farooque v Bangladesh [1997]. In this case the court states that, ‘When public wrong, public injury or invasion of fundamental rights is committed against an indeterminate number of people, any member of society who shares common injury or common invasion has the right to invoke the jurisdiction under article 102. In this case the term ‘any person aggrieved’ was given a meaning in the context of the scheme and objectives of the constitution.

Justice BB Roy Chowdhury in this case said, ‘a person is aggrieved if his heart bleeds for the less fortunate fellow human beings.’ This has paved the way for public interest litigation in our country. If a public duty is owed by a public functionary to general public, every citizen has sufficient interest in the fulfillment of that public duty.

The latest development on the scope of ‘any person aggrieved’ under article 102 is pronounced by the Appellate Division in the case of National Board of Revenue v Abu Saeed Khan [2013]. In this case two guidelines on the admissibility and inadmissibility of PIL were formulated.

To give full effect to the rule of law and to ensure justice the term ‘any person aggrieved’ has been interpreted liberally by the courts from time to time. A constitution of a country is a living document of social evaluation of the people and it is dynamic in nature. Thus, the spacious construction of Locus Standi has paved the way of legal and judicial activism in many countries.