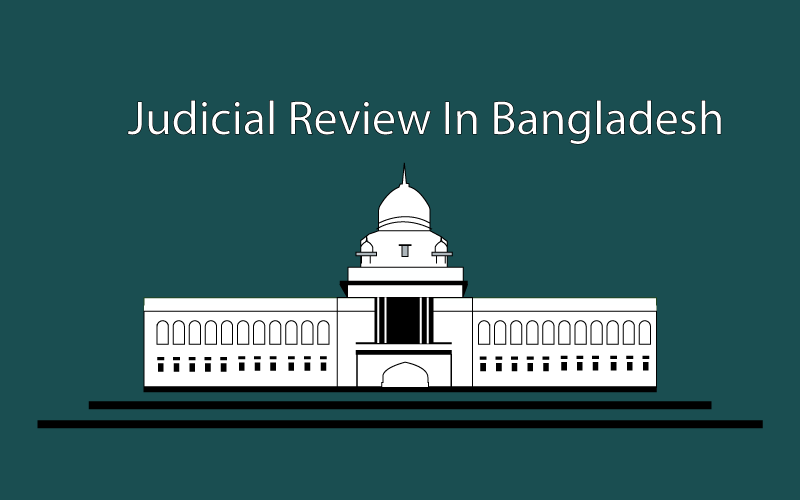 What is the judicial review?

In simple words, judicial review is the power of the court to review the activities and operations of the legislative, executive, public official or any judicial or quasi-judicial body and to regulate their validity.

The key role played by the higher courts in judicial review is essentially supervisory. The higher court of law supervises whether subordinate courts, tribunals or other administrative bodies are doing any activity which is ultra vires or ‘outside of their jurisdiction’.

Is there any constitutional basis of judicial review in Bangladesh?

“A merged reading of the articles above-mentioned pointed out that full judicial power has been conferred by Bangladesh Constitution on the supreme judiciary as an independent organ of the state. It has power to declare a law passed by the Parliament inconsistent with the constitution or fundamental rights it ultra vires.”

Why judicial review is important?

Judicial review is important for the following reasons:

In 1610, Sir Edward Coke, Chief Justice of the Common Pleas declared in Thomas Bonham v College of Physicians (1610) “In many cases, the common law will control Acts of Parliament” and could consider them void.” This historic declaration gave rise to an everlasting moot regarding the enlargement of power between the parliament and the judiciary and also played key role in developing ‘a check and balance’ concept which is recognized today as the judicial review. The idea of judicial review was firmly established by the U.S Supreme Court in 1803 in Marbury V Madison.

Judicial review is not recited in the constitution of USA. Chief Justice Marshall in William Marbury V James Madison declared that:

A number of legal intellectuals argue that the origin of judicial review predated Marbury V Madison. The origin lies in the original intent of the constitution framers and state court decisions. In Hylton V United States [1796], the court upheld federal tax on carriages against a claim that the tax infringed the direct tax provision of the constitution. Although the court had not set aside the statute in question. Thus, the concept of judicial review was familiar before Marbury V Madison. In Canada the power of judicial review was given textual recognition in s.52(1) of the Constitution Act, 1982.

Expansion of Judicial Review in Bangladesh

In present time the notion of judicial review in Bangladesh is facing evolutionary and progressive development. Over the years, The Supreme Court of Bangladesh has made a number of rulings that have struck down laws and executive actions as unconstitutional. In fact, they have been able of expanding their powers of judicial power. In Kudrat E Elahi V Bangladesh (1992) Justice Mustafa Kamal held that, even constitutional amendment come within the purview of ‘any other law’ referred to in Art. 7(2) of the constitution. Thus, it is subject to judicial review. In Jamil Huq V Bangladesh (1982) it was stated that, the court has the power to declare an action unlawful if it is totally coram non judice or is vitiated by malafide or bad faith. In Aruna Sen V Bangladesh (1975) the court stated that, ‘the executive satisfaction of the detaining authority is subject to judicial review in Bangladesh. The authority has to satisfy the judicial conscience of the court that the detention is lawful and made in a lawful manner. The court through judicial scrutiny will apply objective test to determine the ‘state of satisfaction’ of executive authority. In the landmark case of Dr. Mohiuddin Farooque V Bangladesh [1997] the court has interpretated the term ‘any person aggrieved’ liberally which has paved the way of public interest litigation in Bangladesh. When public wrong, public injury or invasion of fundamental rights is committed against indeterminate number of people, any member of society who shares ‘common injury’ or ‘common invasion’ has the right to invoke the writ jurisdiction under article 102.

The evolving concept of judicial review in Bangladesh gave birth to the notion of public law compensation. A new term ‘constitutional tort’ is introduced, where public and private law have merged. The term ‘appropriate’ used in Art. 102(1) has been given a liberal interpretation. Compensation as a constitutional remedy for violation of fundamental rights is incorporated in this term. The concept of public law compensation has firmly established in the case of Bilkis Akhtar Hossain V Bangladesh (1997).  In this case, the court declared, ‘The grounds of detention are subject to judicial scrutiny and if the court discovers the materials and grounds of detention been unreasonable, without rational basis and probative value, it can set aside the detention immediately.’ The High Court Division grant monetary compensation of BDT 1,00000/- to each of four detenus. The Appellate Division held that the High Court Division erred in law in paying monetary compensation as the parties have not prayed for any cost. But the Appellate Division has approved the idea of granting compensation in cases of gross invasion of fundamental rights of the citizens in the present case.  The supreme court as protector and guardian of the constitution has produced mechanisms and devised new redresses for the purpose of vindicating the most precious fundamental rights of the citizens. CCB Foundation V Bangladesh (2017) is the first case where public law compensation was finally realized. In this case the court awarded monetary compensation of BDT 20,00000 for breach of constitutional duty and negligence of the respondents. Once the court found that right to life of a child was violated, it was under constitutional obligation to grant necessary relief. In Md Shahanewas V Govt. of Bangladesh, the court granted BDT 20,000 monetary compensation against a police officer for negligently arresting a poor fisherman, who was deprived of livelihood and liberty for 6 months. In AK Fazlul Haque V Bangladesh the court awarded BDT 25,000 monetary compensation to the petition for non-payment of his pension and delay in receiving the pension. In Bangladesh V Ahmed Nazir (1975) the court stated that the constitution does not stipulate the nature of relief that may be granted. It has been left to the High Court Division to fashion the relief in accordance with the circumstances of the particular case.

This is how the expansion of Judicial Review in Bangladesh developed through these cases.

In living originalism it is believed that a constitution of a country is a living document of social evaluation and it is dynamic in nature. Thus, the holistic approaches of the courts of Bangladesh in the above-mentioned cases have been expanding the branches of judicial review in Bangladesh. The judgments delivered and new strategies developed by the judges are becoming pro-people, which is preventing miscarriage of justice and giving people their long-cherished remedies.

These were all about Judicial Review in Bangladesh. Click here to read more articles/blogs on Constitution.