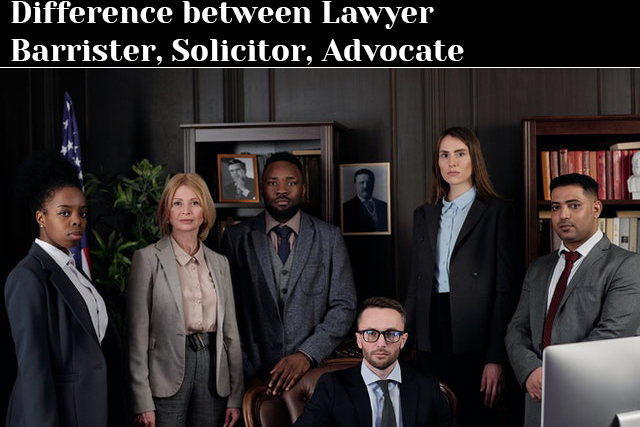 Every subject has a particular job field for that subject. But when it comes to the law, it has a variety of opportunities. A law graduate can choose many paths after graduation. Beyond being a lawyer, there are a variety of careers available in the legal field, many of which connect with one another. For many people, the name “lawyer” conjures up images of a suit, high heels, and a courtroom. Similarly, the term “barrister” conjures up images of a white wig and a black cloak. However, beyond their legal dress, attorneys and barristers are distinct — and in some countries, this distinction is more pronounced. Normally any normal person thinks lawyer, advocate, barrister all these are the same. But there are major differences in these terms. In this blog, we will discuss differences between lawyer, barrister, solicitor, advocate along with Senior Advocate, advocate general, attorney general and more.

Many laymen along with freshman or sophomore law students get confused between lawyer and advocate.

For simplifying, any student studying law is called a lawyer. But this individual needs to graduate. After graduation, he or she will be called a lawyer. It doesn’t matter the length of course. The length of academic courses varies from country to country.  For example, India has both a 3 years and 5 years course. After graduating from any of these two courses, a student can be a lawyer. But now comes the most crucial question. Whether a lawyer can represent their clients?

The answer is NO. A lawyer can’t represent his or her client in court.

Just like a lawyer, Barrister is also a similar concept. But the law graduates from England, Wales, New Zealand and Australia are called Barristers. A barrister can’t represent his or her client in court. To represent a client in court, he has to obtain a licence from the Bar Council.

A solicitor normally proofreads documents, meets clients, drafts case notes and these types of things. Basically, a solicitor gets the case when a client walks in the door and hands it off when it goes to the court stage. So a majority of works are done by a solicitor.

Difference between Barrister and Solicitor

The differences between these two are getting narrower with time. Traditionally, what would happen is a client would go to a solicitor first. The solicitor would go through the case and run the case. Then a solicitor will go to a barrister for specialist advice. It could be for a specialist opinion, court documents, etc. The barrister will mainly do the advocacy. But in recent times, solicitors are doing more and more advocacy and now the barristers have public access as well. So, anyone can directly approach a barrister.

Senior Advocate title is given by the Supreme Court or High Court. There are criteria that need to be followed to be a Senior Advocate. This criterion differs from country to country. In India, 45 years of age and at least 20 years of practice as an advocate is mandatory. Senior advocates’ gowns are different from Advocate’s.

The Solicitor general assists the attorney general in his work.

Public Prosecutor: In criminal cases, the person who appears on behalf of the state is called a public prosecutor. He is also called PP. \