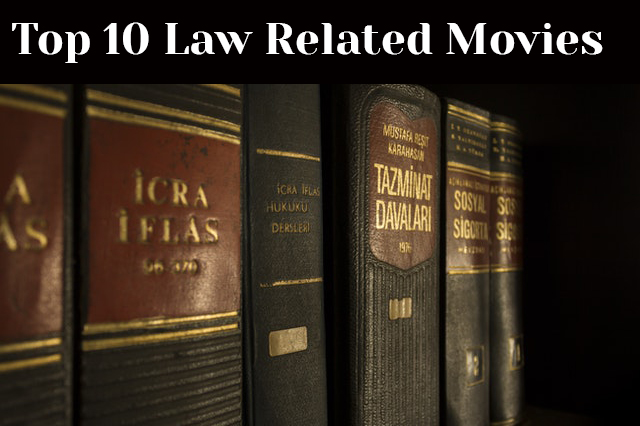 In this blog, we will write about the top 10 law-related movies every law student, as well as lawyer, should watch. We have added 5 honorable mentions as well.

This is the most high-rated movie on Law. Currently, this is at 5 positions in the top-rated 250 movies of all time on IMDB. Despite the movie being made on 1957, this is still considered to be one of the finest pieces of art in modern cinema. The camera movement, acting, cinematography everything was top-notch.

The plot was based on jury decisions. The accused will be punished according to the 12 jury’s decision. At first, out of 12, 11 juries were voting for one decision and one jury opposed that even though it was very clear at first. Then slowly there was debate, discussion, even quarrel. This movie clearly shows the perspective of the different angels and how a judgment without thinking about the external aspects can be an injustice to the world.

This movie is a pure class of art. If you are a law student you should watch this movie.

To Kill A Mocking Bird

This is a pure classical one. Right now, this movie is in 120 positions on IMDB’s Top 250 movies of all time. This one was released in 1962 and it is a B&W film. The movie was based on the Great Depression period. Society was prejudiced against black people at that time. One black man was charged with rape. Gregory Peck as Atticus Finch defended the black man. This movie shows, how cruel society was toward black people at that time.

This movie was not entirely a law-related issue but it was about the life of Atticus Finch’s two-child as well. Any countryside man can relate to the behavior of these two. Both of these two children will catch your attention.

Overall, the movie is a great one and every law student should watch it.

On The Basis Of Sex

This is one of the finest movies on law. This movie is based on Supreme Court Justice Ruth Bader Ginsburg.

If you are a law student, you must know about Ruth Bader Ginburg. This movie focuses on the early life of RBG. Read this detailed article on this movie. Click here to read.

This one is a fictional one and is based on a novel. It is a legal drama film about husband and wife’s fight for the custody of their only child. But it is not completely a courtroom drama rather a very small portion shows the drama in the courtroom. But the judgment is pretty irrelevant considering modern development in modern days. But the movie as well as Dustin Hoffman and Meryl Streep’s acting were really brilliant. Meryl Streep even won Oscar for her role.

This movie shows the struggle of a single father, how fatherhood affects his job as well as life.

This movie is a classic one starring Tom Cruise and Jack Nicholson as the main characters. Tom Cruise’s role as a young Navy lawyer who graduated from Harvard Law School. This film is based on two military marine trials for killing a fellow marine. The defense said it was not a murder rather the two marines were doing exactly what they were told to do and by accident, the marine died. The two were merely carrying out the “Code Red”. Code Red is a disciplinary code that means you have to follow suggestions that come from the top rank.

If you are a law student, you must watch this movie. Even if you are not, then should as well.

The main character of this movie is not a person directly related to law. But the whole movie is based on suit. Julia Robert is the main character and the character’s name is Erin Brockovich. She is a single mother in this movie. To earn bread and butter, she kept searching for a job and finally got a job in a law firm and became a legal assistant. As a legal assistant, she worked harder and more efficiently than others in that firm. The main focus of this movie was a lawsuit related to water supply pollution. Erin played an important role in that lawsuit and she managed the whole community to win the lawsuit. The compensation will shock you and the money Erin Brockovich got from that compensation will shock you more. Do watch this movie if you are a law student.

Witness For The Prosecution

This is a legal drama. The whole movie is based on law, unlike other movies where there are stories and then some parts are related to law. This is a story about a British expert veteran barrister and his client who is under trial for murder. At first, the barrister did not want to take the case because of his health issues but later he took the case. The story evolves after taking the case. Every time the story takes a different turn. This movie has suspension, thriller, and comedy. The acting, directing, and overall all the components made this movie one of the best legal dramas on the silver screen. A law student must watch this movie.

This is one of the finest movies on the law. One altar boy was charged with murder for killing a church father. It was clear that the altar boy killed the father. But still, the advocate wanted to take the case. At first, there was no way to prove the accused free of charge but somehow the veteran advocate made away. There are so many twists in this movie. The story will hook you up in the movie. The performance of Edward Norton as well as were brilliant. If you are a law student you should watch this movie.

This one is one of the most popular and finest movies ever based on legal film. Joe Pesci is in the lead role. Joe Pesci is one of those legendary actors who is still alive. He acted only in a few movies. So, this is a treat for eyes those who love him. This movie starts with a bit of comedic style but with time it turned into a real dramatic one. Every silly thing is somehow connected to the main storyline. The story starts with a fake murder case and Vinny Gambino a.k.a Joe Pesci took the case because it was his nephew’s case. But it was his first case and he failed 6 times in Bar Examination. Moreover, he didn’t join any law firm previously. You can understand how this movie is going from this. Joe Pesci’s acting was brilliant. Do watch this one if you are a law student.

This movie took a different approach unlike other movies in this list. After a lawyer experiences a nervous breakdown while representing a chemical business that he knows is guilty in a multibillion-dollar class-action suit, the legal firm calls in its “fixer” to help. George Clooney and Tilda Swinton are in the lead role.

Though not many movies are based on Law the number is not a small one as well. Here are some of the movies you might consider watching.

1. Paper Chase: Even though this is not a popular one but if you are a law student you should watch this one.

2. Jai Bhim: This is the best movie ever based on the law in India. This is not a Bollywood film. It is a South Film. Currently, this movie has a 9.4 rating on IMDB with 157K votes. This movie is about a Habeus Corpus writ. When a tribal man is detained for alleged stealing, his wife seeks the assistance of a lawyer. This movie is based on a real-life incident. Do watch this one.

3. The Lincoln Lawyer: Matthey McConaughey did a great job in this movie.

These were the top 10 best law-related movies that you must watch. Read our other blogs here.