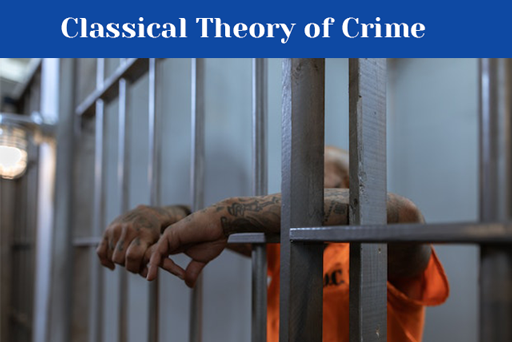 Before going into the details of classical theories of crime, let’s go back to the historical overview to set the stage for the emergence of the classical school. We will start in Europe in the middle ages the time periods ranging from roughly 500 to 1500 A.D after the fall of the Roman Empire.

This period is considered as Dark Ages because of the lack of progress in science and culture. Also, all previously made laws and legal controls were lost as well. This period was dominated by feudalism. In short, feudalism is basically power given to a few Nobility (Lords) by the Kings and the lords had total control over the land and anyone living in those lands was subject to the rule of the lords. The previously centralized system in Roman law was no more in existence. That’s why local law varied from place to place in this period. In this period, superstition was a common thing and people believed in satanic possession. People accused of possession were tortured in Trial by ordeal or trial by combat. Those who failed in Trial by ordeal or trial by combat were considered guilty. Death was pretty common in this period regardless of the seriousness of a crime.

In the 1500s, the system started to change. In this period, people realized that the feudal system had major problems and it needed to be changed. England and France were the two countries to transition into this change. Centralized laws passed. But still, crime was considered as sinful, immoral, and a mental illness. In this period, there were still many problems regarding crime and punishment. Retributions such as isolation or banishment, torture, and corporal punishment were still in this period. Whether a person is guilty or not, was not decided by a judicial process rather it was vindictive and arbitrary.

The period from the 1600s-the 1700s is the period of enlightenment. Domination of monarchy and feudalism was banished and individual liberty and freedom were considered in this period. Free will was given much importance in this period. People started to think about electing someone that they want. This is the period where the foundation of constitutional government started to immerge. The separation between church and state took hold. These things led to the movement of American independence.

This is the period where classical theory was established.

The philosophy of this school was first attributed by the Italian scholar Cesare Beccaria and Jeremy Bentham. The classical shaped the views of how the justice system should work. Principles of the classical school of criminology:

Theories of classical school can be divided into three categories:

According to this theory, crime is a result of a conscious choice that is free will. As per this theory, when the advantages of breaking the law outweigh the costs, people decide to commit a crime.

This theory contends that possibilities and restrictions present in a given circumstance might lead to criminal activity. In plainer terms, it signifies that a person’s actions depend on the circumstances. The way the criminal acts is a result of the circumstances in which he finds himself. It is extremely unlikely that he would act differently in another circumstance.

Due to some loopholes of the classical theory of crime, neo-classical theory started to develop. Scientific matters were first involved in this period. Here the judges started to consider age, sex, mental condition, etc. Before that, these were not considered. For example, for any crime both an adult’s and a child’s punishment were the same. In neo-classical schools, the above-mentioned factors were considered. Minor, idiot and incompetent persons were treated differently and lenient punishment was here in this case. Correctional methods such as parole, probation, reformatories, and open-air camps started in this period.