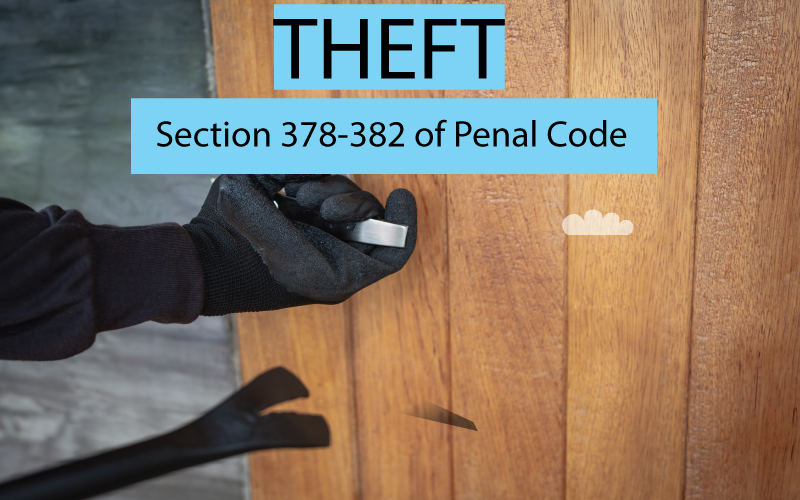 In this blog, we will talk about theft under section 378 of IPC, essential elements of theft with case laws, punishment for theft which is mentioned in Section 379- Section 382.

From the definition under section 378 of IPC, we can see the essential elements or ingredients of theft. These elements are

When all of these happens, then only it is considered as theft.

There has to be a dishonest intention.

In the case Pyarelal Bhargav V State (1963), a government employee took a file from the office and then gave it to someone. After two days, that employee returned that file in the office. Court held it as theft as there was dishonest intention. So, for theft, it is not necessary to transform moveable property for a permanent period. If it is done for a temporary moment with dishonest intention then it will be considered as theft.

Without dishonest intention, it won’t be considered as theft.

In the famous case, Vithal V State of Maharastra (1982), a person name Vithal went to the police station to file a complaint. But all the police were sleeping and did not pay heed to him. So, to teach them a lesson, he took a handcuff and thought of going to the Superintendent of Police. But one policeman caught him and accused him of theft. But the High Court did not liable Vithal as there was no wrongful gain and dishonest intention.

Mistake of fact also won’t be constituted as theft. Mistake of fact is when someone believes something but that is not correct. There is a famous case regarding this issue.

In this case, A person believed that he had a plot which actually wasn’t his plot. Cattle entered that plot. So, he ceased the cattle. Now the owner of the cattle accused him as he was not the owner of that plot. The court didn’t liable him as he didn’t know about it and it was a mistake of fact.

Also in the Rameshwar Singh’s Case, a person mistakenly took another person’s cycle and court didn’t liable him as Mens Rea (Bad Intention) was absent there.

The human body won’t be covered in this section but if someone steals a part of the human body that will be considered as theft under Section 378 of IPC.

Though electricity is not movable property within the meaning of Section 378 of IPC, yet it can be regarded as theft if it is read with S.39 of the Indian Electricity Act. Thus, stealing of electricity will also be considered as theft and it is punishable under section 379 of IPC.

Also, stealing gas, paddy crop, water, animals (Not ferae naturae) these will be considered as theft too.

In the case, KN Mehra V State of Rajasthan, the accused took the Indian Airforce plane without authorization for a temporary purpose. It was held as theft under section 378 of IPC.

Same with, if a forest inspector who is the servant of the government takes wood in his possession and a dishonest removal of such woods without payment of the necessary fees will be constituted as theft too.

Can A Person be liable for his own property

This seems like, a person can’t be liable for his own property but he can. Because in the definition of theft under 378 of IPC says whoever. This whoever can be any person including the person who is the owner of a particular thing or a property. Also, it says possession but not ownership. To understand this more clearly, look at these two examples.

Example 1: John gives his mobile to Adam to fix some problems. Adam fixes the problems. Now John has to pay Adams as he fixes his mobile. If John forcefully takes the mobile without paying Adam, then John will be treated guilty for theft.

Example 2: John pawns his mobile to Adam and takes it back without paying the money with dishonest intention. Here John is guilty of theft of his own mobile.

Punishment for theft is discussed in Section 379 of IPC. Here punishment is up to three years imprisonment or fine or both.

These offences under these are

Compoundable means, the owner of the stolen property can withdraw the case.

This picture will help you to understand a clear picture of all the sections from 378 to 382 of IPC.

By dwelling house, it means building, tent, or vessel which are used for human dwelling. This offense compared to Section 378, is more serious because here theft is happening in a place where human beings are residing. That’s the reason why the punishment in section 380 is more severe than that of Section 378 of IPC.

Here the punishment can be up to seven years or with fine or both.

Here the punishment is up to seven years or with fine or with both.

These were all about Theft which is from Section 378 – Section 382 of IPC. Hope you like this blog. Click here to read more blogs related to Penal Code.