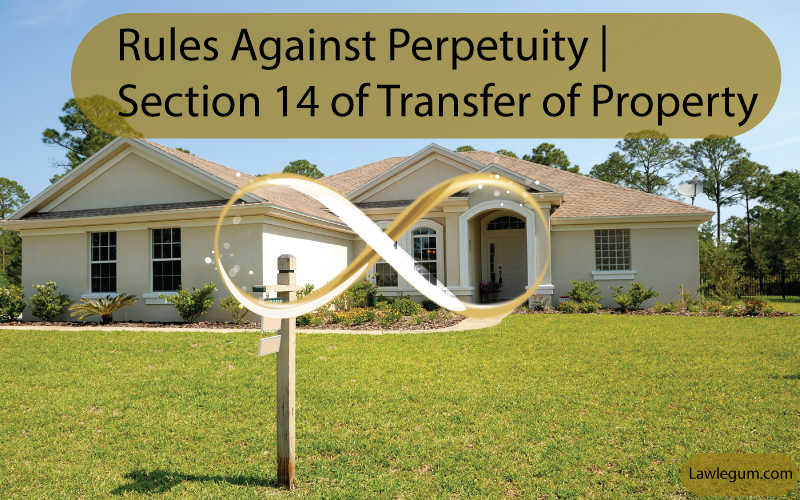 Rule Against Perpetuity is mentioned in Section 14 of Transfer of Property Act, 18882. Section 14 of TPA is closely related to other sections like Section 13, 15,16,17 and 18 of TPA. We recommend you to read the other blogs too. All the sections are explained in details in our website.

From this, the rule against perpetuity came.

Why this Rule Against Perpetuity?

There are many reasons for creation of rule against perpetuity. They are

How Perpetuity May Arise?

Perpetuity may arise in two aspects.

Firstly, By taking away from the transferee his power of alienation. For example, X sells his property to Y with a condition that Y can sell the property only to Z. Here, Z may not buy this property. That’s why this condition is void. Section 10 of Transfer of property talks about it.

Secondly, By creating a succession of partial interest in favour of unborn persons. A transfers his property to B with a condition that it will go to the unborn of B, then the unborn of C, then the unborn of D and so on. Perpetuity has arisen in this case. For this part, Section 14 lays down the time period regarding this issue. From this another important point arises and it is Maximum Timeline.

Maximum Timeline in Rules Against Perpetuity

Regarding maximum timeline, there is a famous case Cadell V Palmer where a property was transferred to 26 persons. From this case, some rules were established. The rules are

Analysis of the Minority Period in Rule Against Perpetuity

In accordance with section 3 of the Majority Act, 1875 every person domiciled in India/Bangladesh has attained majority when he/she have completed his/her age of 18 years and not before. When a minor is under the supervision of the Court of Wards his/her minority ceases at the age of 21 years old and not before.

Extent of the Rule Against Perpetuity

Section 14 of the TPA, 1882 has fixed the maximum limits for postponing the vesting of interest in the ultimate beneficiary. The maximum period in the course of which the property is remained inalienable is called perpetuity period.

The maximum time limit fixed for postponing the vesting of interest:

Life or Lives of the last prior interest holder/s + Minority of the ultimate beneficiary.

The fetal development period from the time of conception until birth is called the gestation period. This period usually lasts for 9 months. An unborn child in the mother’s womb during the gestation period is a competent transferee. If the last prior life interest holder expires before the birth of the unborn person then the maximum period for postponing the vesting interest will be –

So the maximum possible remoteness of vesting is =

Life of the last prior interest holder + Period of gestation + Minority of the ultimate beneficiary.

The scope of postponing the vesting of property in an ultimate transferee is different in English and Bangladeshi/Indian law.

Under English law the vesting of interest in a property may be postponed up to life or lives of last prior interest holder/s plus the age of 21 years old irrespective of the age of minority of the ultimate beneficiary. The English law permits 21 years at large after life or lives in being. According to English law if vesting of property in a transferee has been postponed beyond 21 years, the transfer shall not be void. Transfer shall operate as if age of 21 years had been replaced for the specified in the instrument, which can be any fixed duration longer than 21 years.

As previously discussed, in India and Bangladesh the law permits only the period of minority after a life or lives in being for postponing the vesting of property in a transferee. Also, the maximum age limit is 18 years.

Exception of Rules Against Perpetuity

1.Public Benefit:  Public benefit is discussed in Section 18 of TPA. This is a protection for rules against perpetuity i.e Section 14 as well as other Sections like 16 and 17.

2.Personal Agreements: This rule applies to only transfers of interest. Agreements that do not create any interest in the property are not affected by this rule.

3.Mortgage: Just like personal agreements, mortgage will not be affected by Section 14 as in mortgage there is no creation of future interest.

4.Perpetual Lease: Perpetual lease also is an exception in Section 14.

5.Pre-emption: In pre-emption, if there is no question of any kind of interest in the propery. Then this rule won’t apply.

6.Land Purchased by Corporation: In case of corporation, this rule won’t apply.

7.Gift Made For Charity: This will also not be affection by Section 14.

8.Properties Settles For Memorable Public Service: This is another exception of this section.

Case Laws Regarding Rule Against Perpetuity

In this case, a gift was declared void in light of Section 14 because the given clause in that gift was 21 years which is clearly violation of this rule.

The privy council held that, a gift to an unborn child or generations is forbidden by Muslim law or Mohammedan law except in the case of Waqf.

The Supreme Court held that, section 14 i.e rule against perpetuity does not apply to personal agreements if the agreement does not create any interest in the property.