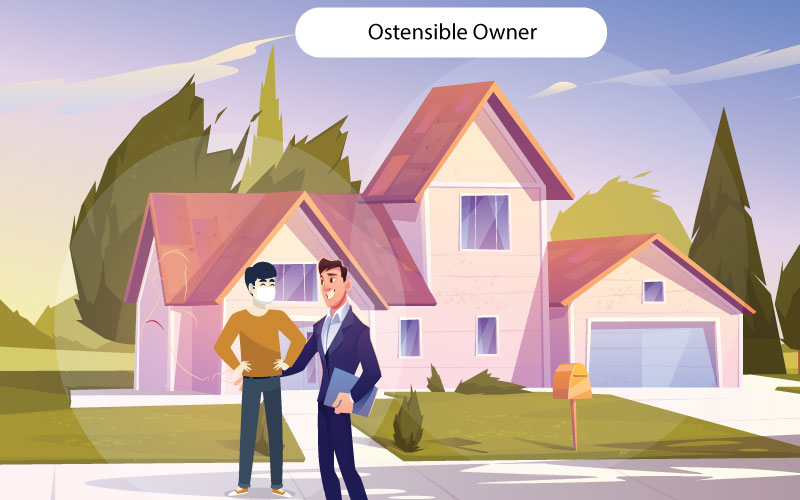 In simple words, the term ‘ostensible’ means which appears to be true but in reality, it is not true. According to Black’s Law Dictionary, ‘ostensible ownership’ connotes to an apparent ownership emanated from conducts or words. Benami transaction is an example of ostensible ownership. Benami transaction implicit that the property is held by one person while, the consideration for the same is granted by another. The concept of transfer by ostensible owner is incorporated under section 41 of the Transfer of Property Act.

Who is the ostensible owner?

Who cannot be an ostensible owner?

The following persons are not permitted to be ostensible owners.

The real owner under section 41 of TPA, 1882 will be estopped or prevented from recovering his/her property from the bona fide purchaser on the ground that the transferor was not competent to make the transfer. The doctrine of estoppel is applied to the real owner because he has given consent express or implied to the ostensible owner to hold the property out.

The Latin term caveat emptor means that ‘let the buyer be aware’. This rule required the transferee apart from acting in good faith, to take all reasonable care to apprise himself of any defect in transferor’s title or clog on his power to affect the transfer. It is essential that the purchaser as a man of ordinary prudence has inquired diligently and has made himself satisfied about the title of the transferor.

The Underlying Principle of Section 41 of TPA, 1882

The doctrine is based on the principle of natural justice, equity and good conscience. The main principle of section 41 is that ‘where one of two innocent persons must suffer from the fraud or malice of a third party, the loss should fall on him who has created or had power to prevent the opportunity for the fraud or malice; and in such situation hardship is caused by the strict enforcement of the general rule.’

Essential Ingredients of Section 41 of TPA, 1882

The followings are the essential ingredients of section 41 of TPA, 1882.

If the above-mentioned conditions are fulfilled then the transfer is valid in the eye of law.

Consent of the real owner

The consent of the real owner must be a free consent, which is given voluntarily in a free will. Under section 14 of The Contract Act, 1872, the definition of free consent is given. A consent will be free and valid, if it is not a consequence of –

The reasonable care and inquiry taken by the transferee must be diligent not superficial. The transferee needs to inquire the fact as a man of ordinary business or a person of ordinary prudence. The inquiry taken by the transferee must have a specific starting point or specific circumstances which must be expected to be led to some outcome. What would be ‘reasonable’ is a question of fact. Under section 41 of TPA, 1882 reasonable care demand the purchaser/transferee to inspect the ‘title-deeds’ under which the ostensible owner claims the title and to confirm if the transferor has the authority to transfer under the deeds. If the purchaser does not fulfil the requirement of reasonable care then he cannot claim the protection and the principle that ‘a man cannot give what he has’ not must apply.

The purchaser must act in a good faith in respect of buying the property. The standards of good faith are –

If the real owner wants to overthrow the purchaser, he must prove that –

If the real owner fails to prove these, he has no remedy against the purchaser.

In the following cases, this section does not apply –

The burden of proof is always on the purchaser to prove that he is a bona fide purchaser and he acted in good faith with proper care and that his transferor was ostensible owner with the consent of real owner.

The purpose of section 41 of TPA, 1882 is to protect the rights of a bona fide purchaser for value.

The real owner can avoid the transfer by his benamidar if no reasonable care was taken by the transferee in the absence of good faith.