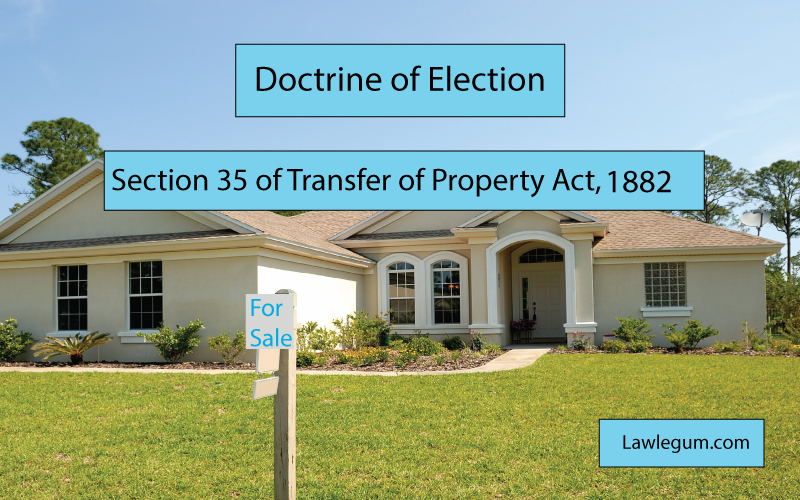 What is doctrine of election?

In simple words, election is a process that puts a person in a situation where he has to choose between two alternative rights or two inconsistent rights. Doctrine of election is a common law principle of equity that requires that a person is under an obligation to elect or choose between two inconsistent and alternative rights in the event where there is an ‘apparent intent’ of the grantor that the grantee should not enjoy both. Doctrine of election is incorporated under section 35 of the Transfer of Property Act, 1882.

According to White and Tudor’s Leading case in Equity,

According to doctrine of election, if a benefit is conferred upon a person under an instrument, that person must also bear the burden. A person cannot take what’s beneficial to him and disapprove to that which is against him under the same instrument.

In the classic words of Mainland, “He/she who approves a benefit under a deed/will or the other instrument, must-

Illustration: By a deed X (transferor) gives to Y (transferee) a farmhouse belonging to Z (owner), and by the same deed gives a factory belonging to himself (X) to Z. Now, Z is put to election that means Z has to choose whether he wants to take the factory of X by giving his farmhouse to Y or not. In this case, Z is entitled to X’s factory only when he conforms to all the provisions of the deed by renouncing his rights in the farmhouse and by giving it to Y.

What are the principles underlying the doctrine of election?

The Latin maxim “quod approbo non reprobo” means that ‘no one can approbate and reprobate.’ In other words, a person cannot accept a thing and reject another in the same instrument. This maxim is one of the underlying principles of doctrine of election. The Courts of Equity in England followed the legal maxim ‘Allegans contraria non est audiendus’ which means ‘he is not to be heard who alleges things contradictory to each other.’ For the first time, doctrine of election was elaborately explained by Lord Hather in the case of Cooper v Cooper [1874] –

An election will be binding if the person entitled to elect has the full knowledge of the rights and interests. Election can be made but once. If two remedies are open and a person takes one and fails, he cannot turn around and adopt the other.

Illustration: If a mortgagee (x) obtains a decree for rent and allows it to be barred, he cannot rely on the charge for the same.

What are the essential conditions for the applicability of the doctrine of election?

In the case of Mst. Dhanpatti v Devi Prasad and others [1970] the essential conditions for the doctrine of election were observed by the court.

The essential conditions for the applicability of the doctrine of election are as follows:

The second paragraph of section 35 states that it is immaterial whether the transferor at the time of transfer of property knows or does not know it to be his own property.

Illustration: By a deed, A transfers 5 acres of land to B which A will get through partition in the future. B in return gives A Rs. 2 lacs in advance. In the present time that 5 acres of land belongs to A’s father and A does not own the property yet. Now, A’s father is put to an election whether he wants to keep the Rs. 2 lacs and give the land to B or not. Whether A does or does not believe that which he professes to transfer to be his own is immaterial.

What are the effects of election against the transfer?

If the owner gives disapproval to transfer of his property –

In what cases the disappointed transferee can claim compensation?

The doctrine of election is based on the principle of compensation and not of forfeiture. In the following cases the disappointed transferee has a claim for compensation:

In the first three cases the case is closely similar to will and in the last case the matter is one of contract and the transferee has a consequent claim for compensation.

What is the quantum of compensation claimed by the disappointed transferee?

Illustration: The coalmine is the property of Mr. Damon (owner) and worth Rs. 1000. Mr. Jon (transferor) by an instrument of gift professes to transfer it to Mr. Steven (transferee), giving by the same instrument Rs. 1200 to Mr. Damon. Mr. Damon elects to retain the coalmine. He forfeits the gift of Rs. 1200.

In the same case, Mr. Jon dies before the election. His representative must out of the Rs. 1200 pay Rs. 1000 (value of the coalmine) to Mr. Steven who is the disappointed transferee.

Who doesn’t need to elect?

Where election is limited to part of a benefit

The general rule is that ‘if a person elects against the instrument, he will forfeit the whole of the benefit received under it.’ The fifth paragraph of section 35 provides an exception to this general rule. This paragraph states that –

What are the modes of election?

The paragraphs of section 35 of TPA, 1882 provide two modes of election.

Whether the benefit conferred on the owner (elector) was accepted with the knowledge of the circumstances is a question of fact subject to the following rules:

Case References for Doctrine of Election

If an instrument is invalid in part, what remains is sufficient to put a person to his election if he claims a benefit under the instrument.

A person can not approbate and reprobate under the same transaction.

These were all about doctrine of election. Hope you like it. You can checkout our other blogs/articles related to Transfer of Property. Click here to read.