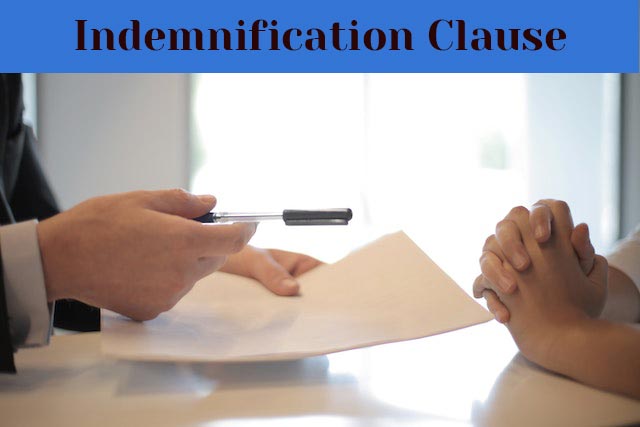 Suppose you own a website. You hired someone to write a blog post for your website. That person instead of writing it copies it from a website and sends it to you. As you don’t know about it, you post it on your website. But after some days you get a copyright infringement letter. Now the question arises, who will be liable? The person who owns the website or who wrote the letter? This is why an indemnification clause is important in a contract.

What is an Indemnification Clause

An indemnification clause is a provision in a contract that requires one party to compensate the other party for any losses or damages that may arise from a specified event or occurrence. This type of clause is often included in contracts to protect one party from potential legal liability or financial losses resulting from the actions of the other party. This clause can take many forms, but they generally require one party (the indemnifying party) to reimburse the other party (the indemnified party) for any costs, expenses, or damages that the indemnified party incurs as a result of a specified event or occurrence. The indemnifying party may be required to pay for legal fees, damages, or other costs associated with a lawsuit or other legal proceedings that arise from the specified event.

Normally in the clause, these three words are always there. Viz

What’s inside an Indemnification Clause?

Indemnification clauses can vary in their language and specific terms, but they generally include the following elements:

What Does It Mean to Indemnify Someone?

To indemnify someone means to compensate that person for any losses or damages that they may have incurred. Indemnification is often used to protect against potential legal liabilities or financial losses that may arise from a specified event or occurrence.

Indemnification can also occur outside of a contract, such as when a person or entity voluntarily agrees to compensate another person or entity for any losses or damages that they may have incurred.

It is important for parties to carefully review and understand the language and terms of the clause before entering into a contract. It is also advisable for parties to seek legal advice to ensure that the clause is fair and reasonable and that it properly reflects the parties’ intentions.